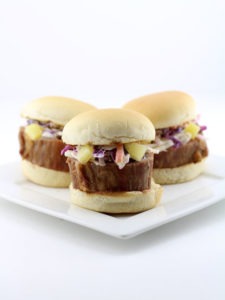 Earlier this year Smithfield asked me if I’d be up for creating a few recipes using some of the Marinated Fresh Pork products that they offer.

Back in March I used their Teriyaki Pork Tenderloin to make Teriyaki Pork Fries With Sriracha Mayo and then then followed those up with a Pork Sirloin Benedict in April.

I’ve mentioned in the previous two posts how all of Smithfield’s Seasoned Fresh Pork is ready to enjoy in 20 – 30 minutes and is great not only roasted or sautéed, but on the grill as well. The problem with living in Wisconsin like I do though is that until you hit late May you’re not really guaranteed decent grilling weather. Sure, we’ll have a few 60 or even 70 degree days beginning in March, but then suddenly Mother Nature realizes that she’s been way too kind to us and sends a random April snowstorm our way. It’s because of this that I used my oven for the two previous Smithfield posts, but for this one I was finally able to grill it!

So, on a sunny Saturday afternoon I fired up my grill and threw a Smithfield Teriyaki Pork Tenderloin down on the grates. While it was grilling — which again, took less than 30 minutes — I whipped up some pineapple coleslaw by combining three cups of chopped white cabbage, a cup of chopped red cabbage, a diced sweet onion, a cup of diced pineapple, a shredded carrot, 3/4  of a cup of mayonnaise and three tablespoons of cider vinegar.

When the Teriyaki Pork Tenderloin was finished on the grill I sliced it into one inch thick pieces, put them on toasted slider buns and topped them with the pineapple coleslaw. Not only were they delicious, but the size and shape of the tenderloin is perfectly conducive to turning into sliders. You can obviously slice yours however thick or thin you want, but with any type of burger or sandwich I usually prefer an equal meat to bun ratio — or even skewed slightly higher towards the meat side of things — so if my bun is an inch tall I like my meat to be at least equal to that.

For as much as I’d like to say that I shared these Teriyaki Pork Tenderloin Sliders with a bunch of friends and we all hung out in the back yard having a great time the truth is that they tasted so good that I ate them all myself over the course of one afternoon. Don’t worry though guys, the next time I make these I’ll make sure I’m prepared with a bunch of extra Teriyaki Pork Tenderloin so there’s enough to go around! 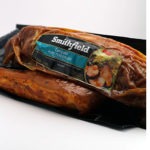 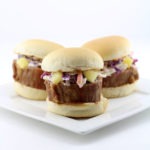 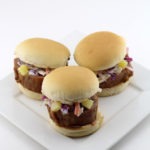