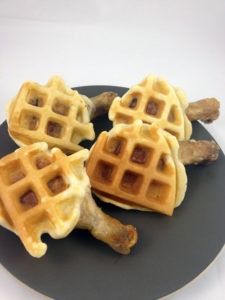 It’s been a pretty crazy 2012 here at DudeFoods. The amount of people reading my blog on a daily basis has far surpassed anything I could have ever imagined, but more importantly, I came up with a ton of new, ridiculous food creations. Seeing as how many of you weren’t reading DudeFoods back at the beginning of the year I figured I’d recap the ten most popular posts from 2012.

Coming in at number one are the chicken and waffle wings that I made and wrote about way back on January 5th — a food which Gizmodo called “the most brilliant snack of the millennium” and Make Magazine dubbed “a conceptual work of art.” I always planned to follow them up with a version that had either chocolate chips or bacon — or both — in the batter, but never really got around to it. Oh well, maybe next year!

Even more impressive is the fact that the beer and bacon battered deep fried Doritos that I wrote about just a few weeks ago are already the fifth most popular DudeFoods story of the year. They were pretty amazing though, so that’s completely understandable I guess.

Alright, without further ado I present you with the top ten DudeFoods blog posts of 2012! I’ve got plenty more planned for 2013, so keep checking back, and make sure you follow me on Twitter and Facebook for all the latest DudeFoods updates!