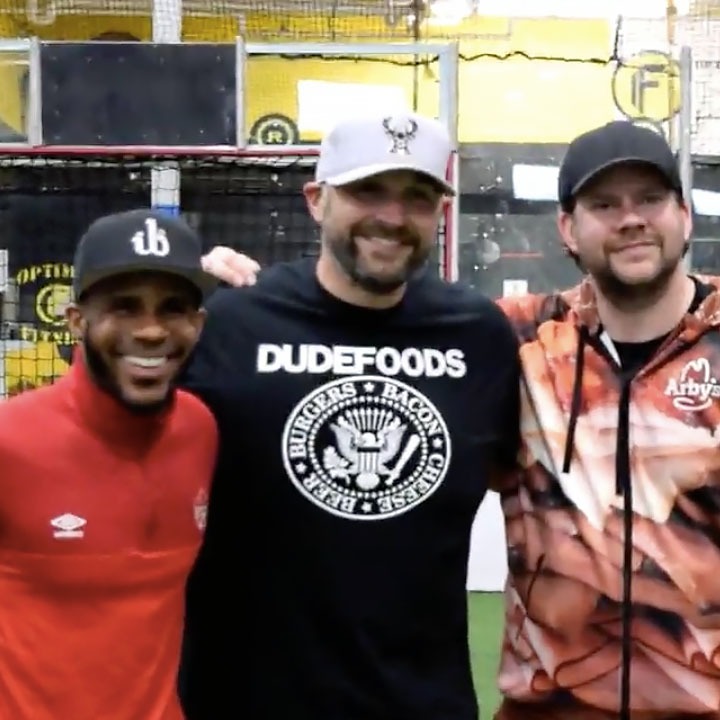 Have you ever wondered what would happen if a food blogger — who writes mostly about things like bacon and deep frying — drank too many beers and suddenly decided that he was an amazing soccer goalie? Well… you don’t have to wonder any longer because it just happened!

After Wes and I recorded episode 93 of the Dude Foods Podcast we did what we do after almost every episode — we headed up the street to the closest bar and grabbed a beer. As we were hanging out Wes asked me hypothetically how many shots on goal I thought I could stop from professional soccer player Ian Bennett, who had just won the Major Arena Soccer League championship with the Milwaukee Wave and coincidentally also records a podcast called Inspire Greatness at the exact same studio where we record ours.

I told Wes that I thought I could maybe stop two out of fifteen shots, my reasoning being that I assumed one of Ian’s shots would either hit the goal or miss just by default and that one of the other shots would probably hit me. Wes immediately texted Ian and told him I said I could stop something ridiculous like five out of ten shots. What started off as a hypothetical situation somehow turned into Ian and I actually going one on one at an indoor soccer facility a week later.

The day of the event I did everything I could think of to make sure I was prepared. I wore my Arby’s meat sweatsuit — which is the most athletic thing I own — I spent the morning carb-loading — by eating a family size tray of Wendy’s chicken nuggets — and I even stopped and bought a Gatorade. Then I remembered that I don’t like Gatorade so I emptied out the bottle and filled it with Mountain Dew instead.

So, how did I do? You’ll just have to watch the video below to find out! Also, I should probably thank Ian for taking it a little easy on me because I saw him kicking soccer balls full speed as he was warming up that day and yeah, I’m pretty sure I wouldn’t have stopped a single one of them….