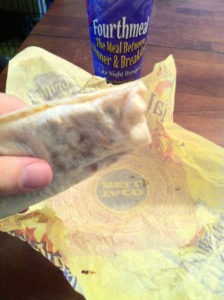 It seems like Taco Bell introduces new menu items every few weeks. I just wrote about their new XXL Chalupa, and now they’ve introduced three new items that all include Fritos as their main ingredient. For $1.99 (or $3.99 if you want a taco supreme and soda as well) you can now get a Half Pound Chili Fritos Burrito, a Fritos Crunchwrap or a Chili Fritos Nacho Supreme. The funny thing about this is that they actually offered a burrito with Fritos in it a couple years ago and then discontinued it. I never got a chance to try it then, so this time I made it a point to head to Taco Bell and order one as soon as I heard about it.

Out of the three choices offered the Half Pound Chili Fritos Burrito sounded the most appealing to me, so when I stopped in for lunch I ordered that, a taco supreme and a soda. The first thing I noticed about my burrito before I even took a bite was that there’s no way that this thing was half a pound. It was a quarter of a pound maybe, but definitely way smaller than a half pound.

The burrito itself was pretty good. About half of the Fritos inside of mine were pretty soggy by the time I got it home and ate it, but that’s partially my fault for ordering my food to go instead of just eating in it the restaurant. Part of me just doesn’t really understand the need for Fritos inside a burrito though. The plus of a food item such as The Walking Taco is that in addition to making your food easier to eat, the Fritos are there to make up for the crunch that you’re missing out on from not having a hard taco shell as part of your meal. I guess I can see where they’re going here since the burrito has a soft shell, but they could almost get the same affect by just wrapping a soft shell around a hard shell like they do with their Double Decker Tacos. 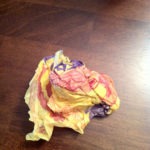 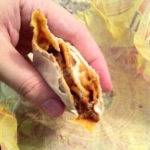 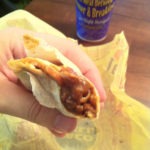 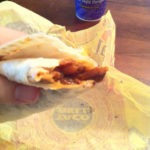 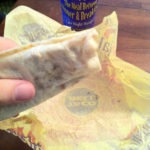