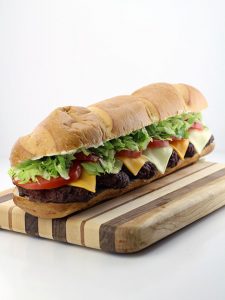 Back when I was a kid and the movie Batman Forever came out McDonald’s added a burger to their menu that featured three ground beef patties, two types of cheese, lettuce, tomato, onions and mayonnaise on an extra long bun. They called it the Superhero Burger and I loved it!

It was only available for a limited time and for the month or so that they sold it I’m pretty sure I ordered one every single time I ate at McDonald’s, which was a lot. It was relaunched regionally in select markets years later as the Triple-Double Burger, but from what I can remember it was never available again in Milwaukee, which is where I’m from.

Since that time five more Batman — and about 100 other random superhero movies — have been released, and with the announcement of every single one of them I secretly pray that the Superhero Burger will return, yet every single time McDonald’s lets me down so I decided to stop waiting on them and just make my own!

Although I tried to keep my burger as close the the original as possible a couple things had to change. For one, those puny 2 ounce McDonald’s ground beef patties just weren’t going to cut it so I opted for half pound patties instead. Oh, and instead of three of them I used six! Instead of two slices of cheese I went with six as well. You know… because I didn’t want any of those burger patties feeling left out that they didn’t have a slice of cheese on them like the others did…. Aside from that I stayed true to the McDonald’s version and topped mine with lettuce, tomato and onions.

So, although my recreation of the Superhero Burger was great — especially with the larger ground beef patties and extra cheese — I’d still love to see it back on the menu at McDonald’s so I could just walk in and order it two, three or even five days a week on my lunch break. If every other year is any indication I’m sure there will be about ten different superhero movies released this summer so come on McDonald’s, bring back the Superhero Burger!