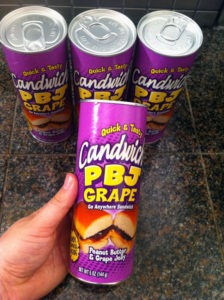 Just when you thought there was no way to improve upon the peanut butter and jelly sandwich along comes Candwich and their PB&J sandwich in a can. Inside each 24 ounce can you’ll find bread (which is similar in style to a hot dog bun) a package of peanut butter, a package of jelly, a plastic knife and a Laffy Taffy for desert.

Right now I know that you’re probably thinking to yourself “Why wouldn’t I just buy a loaf of bread, some peanut butter and jelly, make my own sandwiches and save myself some money?” Well, I’ll tell you why, because Candwich sandwiches don’t need to be refrigerated and they have a shelf life of at least a year! That’s right, thanks to their unique packaging (and a good amount of preservatives) not even the bread goes bad!

I was actually pleasantly surprised how good my sandwich tasted, especially the bread. The Laffy Taffy was a nice touch too. If they’d add a package of powdered milk to the can as well they could really turn this into an entire meal in a can.

The fine folks at Candwich were nice enough to send me four cans of peanut butter and jelly sandwiches, one of which I ate to write this review. Do you know where the other three are? They’re sitting in my desk drawer at work for the next time I’m hungry and have nothing to eat. That could be a week from now or six months from now or a year from now, but at least I know that whenever that time is I’ll have a fresh peanut butter and jelly sandwich to enjoy. As a matter of fact, I’m going to make it a point to save one of the cans for exactly a year and eat it on the anniversary of this blog post just to see if they really last a year, so make sure you check back on June 20th, 2012 for a follow-up!

As of right now Candwich only offers peanut butter and grape jelly sandwiches in a can, but they plan on launching a strawberry version later this year, as well as a BBQ chicken sandwich in a can. Wanna try a Candwich for yourself? A four pack will run you $12 (which includes shipping) and can be purchased from their website.

Update: 6/20/2012 — As promised I saved one of my Candwich peanut butter and jelly sandwiches for a year to see if they can really last that long. I cracked it open last night, made my sandwich and took a bite and you’ll be happy to know that it tasted exactly the same as my sandwich a year ago did. This sort of amazes and scares me equally, because I’m not really sure that bread is supposed to last that long, but when they say that their sandwiches can last a year they’re absolutely right! 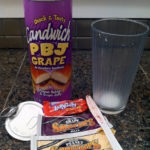 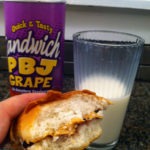 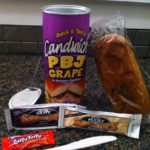 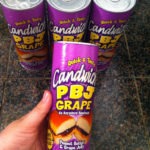