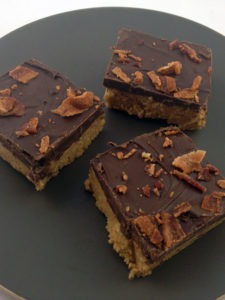 Back in November I got a box of nuts in the mail from Planters which I then used to make some pretty delicious bacon & almond pumpkin spice pancakes. Last week I received another package from them containing peanuts, pistachios, almonds and a few jars of Planters peanut butter.

Up until I opened that box I actually had no idea that Planters even produced a peanut butter, and as it turns out they apparently didn’t until last summer. Since all this peanut butter would take me forever to eat if all I used it for was peanut butter and jelly sandwiches I decided that this was the perfect opportunity for me to try and come up with a recipe where I could use a decent amount of it.

After brainstorming for a few minutes I remembered that as a kid I used to love peanut butter bars. In addition to that, they’re ridiculously easy to make. I did decide to make one small addition however and add some bacon to the recipe.

The peanut butter bars turned out just as great as I remembered them and the addition of bacon made them even better!

If I made them again I’d probably try adding a couple mashed up bananas as well to turn them into a desert version of the classic Elvis sandwich. Seriously, think how awesome those would taste! 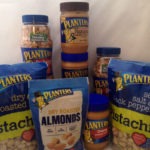 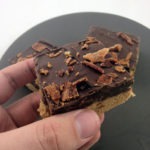 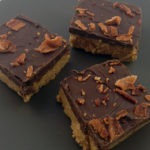