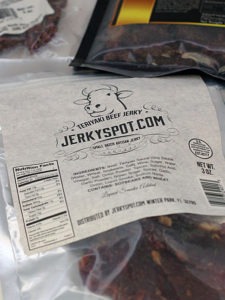 I’ve never been a fan of those of the month clubs because there’s just never really been one that appealed to me. I don’t drink coffee, so a coffee of the month club is out. Hot sauce? I barely use it so I have no idea what I’d do with two or three bottles a month. I love trying new beers, but there are plenty of liquor stores where you can just walk in and assemble your own six pack, so if anything I’d just prefer to do that.

Recently though JerkySpot.com offered me a free membership to the JerkySpot Jerky of the Month Club and the more I got to thinking about it the more I realized that this was possibly the best of the month club for me.

For one, I honestly don’t know much about jerky at all aside from the fact that I love eating it. Second, the only places I ever see jerky available around me are gas stations or stores like Walmart and Target. Third, when I do see that jerky all I ever see are the same two or three big mass produced brands, so the option to try something new each month is a pretty big plus for me.

The basic JerkySpot Jerky of the Month Club membership will cost you $24.99 a month and provide you with a minimum of three, three ounce bags of jerky per month. They also have four and five bag memberships available for $32 and $37 a month. Could you find jerky for cheaper if you bought it yourself from someplace like your local gas station? Absolutely, but I can tell you that after trying my first three bags that the jerky from JerkySpot is much better quality.

You can see photos of the three bags I received below and although I loved all of them I’ve gotta say that the Black Label Draft Ale Beef Jerky was my favorite just due to the sheer uniqueness of taste it provided. In terms of quality jerky though they were all pretty damn delicious. So, if you’re a jerky fan what are you waiting for? Check out the JerkySpot Jerky of the Month Club today! 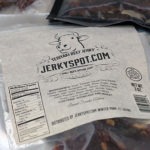 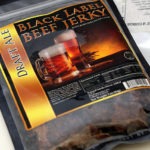 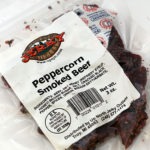 2 Comments on Review: JerkySpot.com’s Jerky of the Month Club