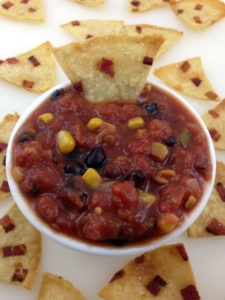 Hormel recently sent me a case of their new Black Label Cob Smoked bacon to try out. So what’s cob smoked bacon you ask? It apparently dates way back to the days of the settlers, when farmers would harvest corn, dry it out and then build slow-burning fires with the cobs in smokehouses where they’d then hang freshly cured pigs.

For a while now I’ve wanted to try making my own corn tortilla chips, and now that I had a good 20 pounds or so of corn cob smoked bacon to experiment with as well I decided to just combine the two into some Bacon and Corn Tortilla Chips.

Making your own tortilla chips is actually remarkably easy. All you really need is corn flour, water, salt, olive oil and in this case some cob smoked bacon. Technically any kind of bacon would work for these chips, it’s just that corn cob smoked bacon, corn tortilla chips and the corn salsa that I dipped them in when I was done just went so damn well together.

Start off by combining 1/2 cup of corn flour with 1/3 cup of water to make some corn tortillas. This recipe was straight off the package of corn flour that I bought. You may need to add a little extra water though. Roll your corn flour up in a ball and then divide it into four smaller balls. If the balls of corn flour are cracking that’s how you’ll know if you need more water.

Then, take each of the four smaller balls and place them between plastic wrap and flatten them out as much as you can one by one. This is also when you’re going to want to add your cooked, diced bacon pieces. I used about 1/3 of a slice of bacon in each dough ball. I just flattened them out as much as I could, sprinkled the bacon pieces over them and then flattened them a little more so the bacon stuck into the corn flour. In the end your circles of dough should be about five inches in diameter. Next, drop the tortillas in a hot pan and fry them for a minute on each side.

Alright, so now you’ve got some bacon and corn tortillas, but what we ultimately want are tortilla chips, so next up you’re going to take the tortillas you just made and cut each one into six triangles. Then, brush those triangles with olive oil, sprinkle some salt on them, bake them in your oven for ten minutes at 400° and you’ll be left with some delicious Bacon and Corn Tortilla Chips!

Now, this recipe only makes a total of 24 chips, so depending on how many you want you’ll probably have to multiply the quantities a bit. If you plan on making a ton of them it might be smart to invest in a tortilla press as well, because flattening all those tortillas by hand might turn into a bit of a chore. Then again, it’s not like you can walk into the grocery store and buy a bag of these Bacon and Corn Tortilla Chips like you can with regular tortilla chips so it’s definitely worth it. 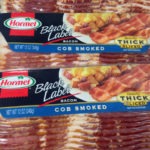 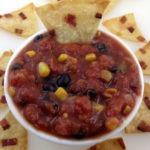 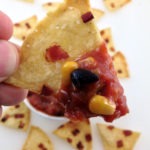