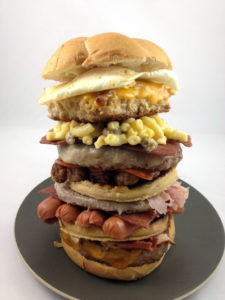 You may not be aware of it, but today, November 15th, is National Clean Out Your Refrigerator Day. I have no idea how long this so-called holiday has been around or who started it since this is the first time I’ve ever heard of it, but I decided to celebrate anyway by doing a little fridge cleaning of my own. Now, when most people clean out their refrigerators the food usually just ends up going straight into the trash. Not me though, I decided to clean out my fridge and freezer and combine everything that I came across into one epic sandwich.

I started off in my refrigerator, where there actually wasn’t a ton of food to begin with. I ended up pulling out some Cheddar cheese, a couple slices of Provolone cheese, some deli turkey and deli ham and a half finished package of pepperoni. Those five things on their own would make a pretty boring sandwich, so luckily for me my freezer was packed with tons of old food.

Digging through my freezer I came across a Johnsonville brat burger patty and a Johnsonville Italian sausage patty that were left over from when I made my Bacon Weave Brat Burger, a couple Ballpark Franks, a turkey burger, some maple syrup flavored breakfast sausages, a package of Oscar Mayer turkey bacon, two toaster waffles, a Banquet Cheesy Macaroni & Beef frozen meal and finally some white mystery meat that I found buried way in back of the freezer. Even after eating the sandwich I’m not quite sure what type of meat it was, but I’m pretty sure it was ground turkey at some point. Oh yeah, I also topped the sandwich with a fried egg.

Right about now I know that you’re probably thinking to yourself “Man, that sandwich must have been pretty dry with all the different types of meat…” Nope, not at all, because in my refrigerator I also happened to find some old Papa John’s garlic dipping sauce as well as some sweet and sour sauce packets from a recent order of Chinese food, both of which I also added to my sandwich.

Since the sandwich was nine inches tall (yeah, I measured it) it was pretty impossible to eat as an actual sandwich and I just ended up dismantling it and eating it over the course of two different meals. I guess that kinds of defeated the purpose of making it into a giant sandwich to begin with, but at least I have a whole lot more room in my freezer now! 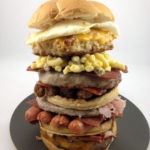 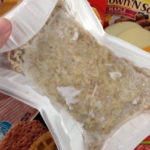 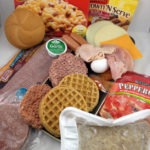 5 Comments on Happy National Clean Out Your Fridge Day!