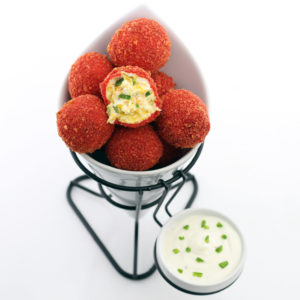 Last May I made some Flamin’ Hot Cheetos Breaded Jalapeño Poppers that turned out pretty amazing. The post received a comment from a DudeFoods reader named Laura though saying that although she SOOOOO wants to try them — her words, not mine — the texture of peppers always grosses her out when she bites into them. Well Laura, these Flamin’ Hot Cheetos Breaded Jalapeño Popper Bites are for you!

Granted, I have no idea if Laura actually reads DudeFoods regularly or if she’ll even see this new recipe more than ten months later, but at least I enjoyed making and eating them!