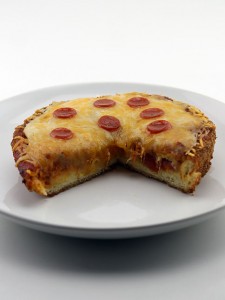 Well, I think I’ve officially lost my mind…. What you see here is a pizza that has a second breaded and deep fried pizza as a crust. (Trust me, it’ll make more sense if you watch the video below)

I guess I could make some sort of joke about the movie Inception as it relates to this pizza, but not only would the joke be outdated by five or six years, but it probably wouldn’t even be that funny because I’m not sure that I truly even understood the film completely. Don’t get me wrong, I absolutely loved Inception and I’ll definitely watch anything Christopher Nolan ever writes or directs — plus, Marion Cotillard is easily one of my favorite actresses of all time — but I just feel like there’s some sort of deeper meaning behind it.

Think about it, they’re in a dream and then in another dream within that dream and then they enter a third dream within that dream and then even further down you can be in limbo where your mind is so far removed from reality that you can actually think that the state of limbo you’re in is the real world, so in the film when it seems like they’re actually back in the real world is that really even the real world? Maybe I should just buy the DVD and watch it with the commentary on. I’m sure they explain it. Who knows though, maybe it’s supposed to be like Mulholland Drive where no one really ever understands it.

Anyway — now that my brain hurts — back to the pizza! To create it I just took one cooked pizza, breaded it in panko breadcrumbs and deep fried it before topping it with sauce, cheese, and pepperoni and tossing it in my oven for ten minutes at 350°. Not surprisingly, pizza makes a pretty great pizza crust! I might have to turn this into a regular thing!