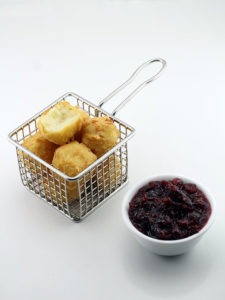 Do you know what I love most about Thanksgiving aside from the food? No, it’s not getting up at 2am the following morning to stand in the freezing cold so I can save some money on a bunch of cheap electronics that I don’t need, it’s that for a few days I get to hang out with all my old high school friends who have since moved away while they’re back in town visiting their families.

This past weekend a few buddies of mine who arrived home extra early for the holiday and I got together at my place, which worked out perfectly because earlier that week Leinenkugel’s shipped me a bunch of their seasonal Cranberry Ginger Shandy for review. If you know me though you know that I couldn’t just do a basic beer review, I had to use the beer to make something food-related.

Believe it or not this isn’t the first time I’ve made Deep Fried Mashed Potatoes. Or the second… Or the third…. For as amazing as they are though I always felt like something was missing and apparently that something was a Leinenkugel’s Cranberry Ginger Shandy sauce to dip them in!

To make the Deep Fried Mashed Potatoes I filled an ice cube tray with mashed potatoes — and added a square of butter to the middle of each cube to make sure they were extra delicious — and then tossed the tray into my freezer for a few hours. After popping out the frozen mashed potato cubes I coated each one in flour, dipped them in egg and then rolled them around back in a bowl of flour before dropping them into my 375° deep fryer for two or three minutes until they were golden brown.

I wasn’t done yet though! Something as delicious as Deep Fried Mashed Potatoes needs an equally tasty dipping sauce, and to make that I combined a 1/2 cup of Cranberry Ginger Shandy and a 1/2 cup of sugar in a saucepan over medium heat for about five minutes and then added a cup of cranberries.  After about ten more minutes of occasional stirring your cranberries will start to pop and that’s when you’ll know that your sauce is ready. It’s going to smell amazing and you’re going to want to eat it immediately, but make sure that you refrigerate it for a little while prior to dipping your Deep Fried Mashed Potatoes into it and taking a bite unless you want to burn your mouth. I learned that one the hard way….

In the end the beer was a hit, the Deep Fried Mashed Potatoes were a definite crowd-pleaser and everyone went home happy. What’s even better is that I still have one bottle of Cranberry Ginger Shandy left so I might have to whip up another batch of this sauce when my family stops over on Thursday for Thanksgiving! 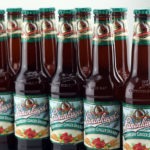 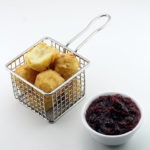 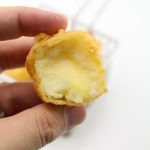