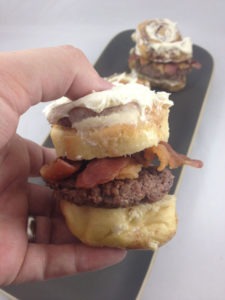 A few weeks ago I wrote about a burger I created called the Cinnaburger, where I combined a half pound burger patty, a Cinnabon and some bacon into a delicious artery-clogging, heart attack-inducing treat. I expected it to be a popular post, but I certainly didn’t expect it to get quite the amount of press that it did.

About a week after I originally posted it my burger was written about on the Huffington Post, mentioned on CNBC and I was asked to appear on a radio morning show in North Carolina. One writer even likened it to Paula Deen’s infamous doughnut burger. Yep, after doing this blog for a year and a half I’ve finally been compared to Paula Deen. I’m honestly surprised that it even took that long….

With Hollywood movies when there’s a film that does exceedingly well they always release a sequel right? Well, here’s the follow up to my Cinnaburger! I call them Cinnasliders! I think that part of me just wanted another excuse to combine Cinnabons and burgers, but who cares because these things are delicious!

This time my buns consisted of Minibons, which are about a third of the size of regular Cinnabons, and once again I topped them with fresh home-ground beef burger patties and bacon. I did make one small addition however — I picked up an extra cup of frosting for dipping purposes!

Do you know what the best part about the Cinnasliders was though? Unlike the Cinnaburger you can actually pick them up with your hands and eat them! Granted, they’re still pretty messy, but at least with these I was able to ditch the knife and fork. I did have to use five napkins though…. 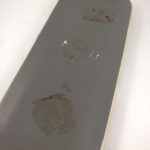 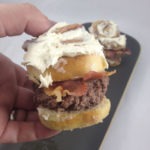 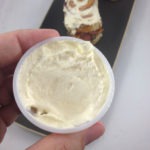 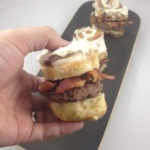 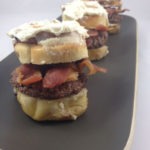 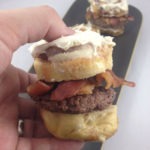