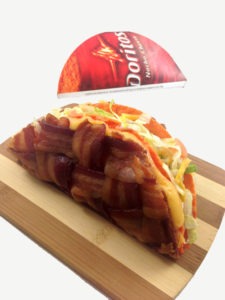 Back when I made my Bacon Weave Taco a few people suggested that I use the same bacon weave shell in combination with Taco Bell’s Doritos Locos Taco. Well, I took it one step further than that by adding a melted, three cheese blend between the two shells, similar to what Taco Bell does with their Cheesy Gordita Crunch.

I also need to thank Hormel for continually hooking me up with free bacon because between this and all the other bacon related things I’ve been making lately I can’t even imagine how much money they’ve saved me.

Now, aside from making the bacon weave taco shell this seems like it should be a fairly easy process. Just take a Doritos Locos Taco, place it inside the bacon weave shell, sprinkle some cheese between the two and throw it in the microwave right? Actually, it’s not quite that simple….

You see, unless you want all the cheese in your Doritos Locos Taco to melt and your sour cream to get all warm and runny, what you really need to do is completely empty out your Doritos Locos Taco, melt the three cheese blend between the two shells and then refill it. Not really a huge deal, but a little time consuming nonetheless.

Do you know what the hardest part about writing a food blog is? Having to stare at something this delicious knowing that I can’t start eating it until I’ve taken a bunch of photos.

After seeing how well my Cheesy Bacon Weave Doritos Locos Taco turned out there’s clearly only one thing I can do now — make another one, dip it in a beer and bacon batter and deep fry it! 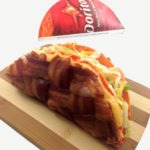 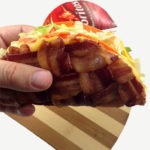 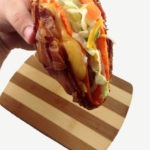