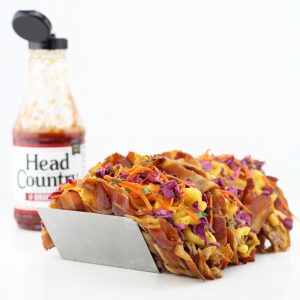 This is my third time creating a recipe using Head Country Bar-B-Q sauce and seasoning and honestly, the first two turned out so amazing that I was a little worried I wouldn’t be able to top them.

It started last summer when I made Pulled Pork and Cornbread Shooters, which I then followed up earlier this year with Pulled Pork Corn Dogs.

For my third recipe I decided to take pork and combine it with even more pork by making bacon weave taco shells and filling them with pulled pork.

As awesome as the pulled pork would have been on its own I knew that I wanted to add something else to the tacos as well, but couldn’t decide between macaroni and cheese or coleslaw since they both pair so well with pulled pork. Finally I just decided to add both, so it’s basically an entire meal right inside your taco!

When it came to the coleslaw I also debated over which type of slaw I wanted to make, and I finally decided on a sweet and tangy red cabbage slaw with cabbage, carrots, cilantro, brown sugar, lime juice and orange juice. If you’ve got a go-to coleslaw recipe that you love though you can obviously use that one instead.

The other great thing about this recipe is that aside from the bacon weave taco shells you can put as much or as little effort into it as you want. If you want to use boxed macaroni and cheese go for it. Feel like using bagged coleslaw from the grocery store instead of making your own? No problem!

Making the bacon weave taco shells is a little tricky, but once you get the hang of it you can knock them out pretty quickly. The trick is to weave the bacon together into a square and bake it in your oven right up until the point where it’s almost done cooking, yet still able to be cut into a circle and hung over two kabob sticks to ensure that it finishes off the cooking process while keeping its taco shell shape.

Obviously cooking times will vary based on the thickness of bacon you use, but I’ve included a guideline in the recipe below for you to follow. Plus, if you mess one of them up and the shell doesn’t turn out all that happens is that you’re left with extra bacon to eat, which isn’t a bad problem at all!