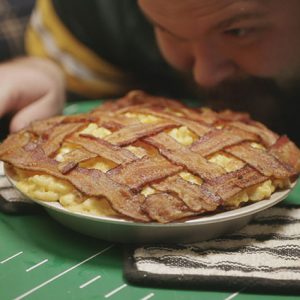 I’ve experienced a ton of awesome blog-related stuff since I started DudeFoods seven years ago, but one of the most fun experiences came recently when I partnered with two Wisconsin companies, Pick ‘n Save and Johnsonville to create a series of over the top Gameday Grub videos celebrating everything we love about Wisconsin.

For the first of six videos we re-made the first recipe of mine that ever really went viral — a macaroni and cheese pie with a crust made entirely out of bacon, only this time we made it even better by adding diced Johnsonville Andouille Sausage.

Since I originally made this pie back in 2011 when I was still taking blog photos with my old school phone it was pretty exciting to redo the whole thing with a professional crew to make sure it turned out amazing.

The only thing you’ll really need to worry about with this recipe is making sure that the bottom bacon weave crust is completely cooked before you fill the pie tin with macaroni and cheese and throw it back in the oven. Although the recipe is listed below you’ll still want to keep an eye on it because the cooking time will probably vary based on the thickness and quality of bacon you’re using.

You know what the worst part about a failed bacon weave crust is? You have a bunch of extra bacon you can eat, which is actually pretty awesome in my book. Aside from that though this recipe is literally as easy as pie! (My mom is probably the only one who will actually laugh at that.)

So, without further ado, here’s video number one! If you’d like to make an Andouille Mac & Cheese Pie With Bacon Weave Crust for yourself the recipe is below! Enjoy!