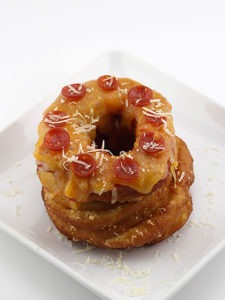 Are Cronuts still popular or has the hype finally died down? The last time I was in New York City there were still crazy long lines outside of Dominique Ansel Bakery, but that was a year and a half ago.

Usually I’m way ahead of the trends when it comes to crazy food creations, but with this one I realize that I’m way behind. Either way, I felt like making a Pizza Cronut so that’s exactly what I did!

I started off by taking some croissant dough and cutting it into circles using an upside down glass. To poke the holes in the middle I used a jigger that I grabbed out of my liquor cabinet, because you’ve gotta make due with what you’ve got right?

For each Cronut I then stacked five layers of dough — with cheese between each one — on top of one another and then deep fried them for about a minute until they were golden brown. After that I topped them with pizza sauce, even more cheese and some mini pepperoni and then baked them in my oven for seven minutes at 350º.

I originally tried making the entire thing in the oven, just skipping the deep frying part of it completely, but all that left me with was a flattened pile of cooked dough, sauce, cheese and pepperoni. I mean, I ate it anyway, but looks wise it was a total mess…. I also probably didn’t need to make them as tall as I did, but since there was cheese between each layer they were awesome either way. As a bonus my wife also reminded me that we had some Parmesan cheese in our refrigerator so I grated fresh Parmesan over my Pizza Cronuts as well. Wanna try making your own? Check out the video below!