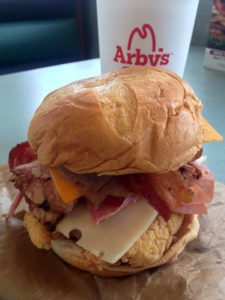 By now you’ve probably heard about the Meat Mountain, the new sandwich from Arby’s that contains 1.5 ounces each of six different meats — roast turkey, ham, corned beef, brisket, Angus steak and roast beef in case you were wondering — plus a couple slices of cheese, bacon and two chicken tenders.

The rumor is that the Arby’s marketing team created a poster showcasing all the different types of meat that their restaurant offers — you can see a picture of said poster in the gallery of images down below — when people started coming in and confusing the poster for an actual sandwich and ordering it. Now I have no idea if that’s true of if this is just some sort of amazing PR stunt but honestly, I don’t care because I finally got a chance to try the Meat Mountain and not only is it real, but it’s spectacular!

Even after seeing photographic proof that multiple people have successfully purchased this amazing sandwich I still sort of expected to walk into Arby’s only to have them be completely baffled when I asked for a Meat Mountain, but sure enough for $10 — which is actually a pretty amazing deal considering that the sandwich had to weigh at least a pound and a half — I was able to order one.

This sandwich rules. I absolutely devoured it. I also love that they didn’t even try to mess around with adding any lettuce or tomatoes on it, just meat and cheese. With that much meat though it would definitely be a little bit tastier if they maybe added some of the melted cheese that they use for their Beef ‘n Cheddar sandwiches, but then again I’m sure I could have also asked for some on the side.

Hopefully this isn’t the end of the Arby’s secret menu. I’d really love to see what they can come up with next. In fact, I’d love it if more fast food chains did stuff like this. Who knows, maybe next McDonald’s can make the McEvertything a secret menu item. The again at $140.33 it isn’t quite as reasonable priced as the Meat Mountain….

Disclosure: As an Arby’s Meat Crafter Ambassador, Arby’s sent me a gift card to try the Meat Mountain, but all opinions are my own. If you’re interested in becoming an Ambassador yourself I’ll have more details on that soon! 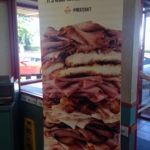 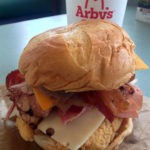 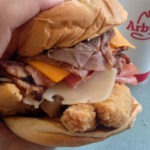