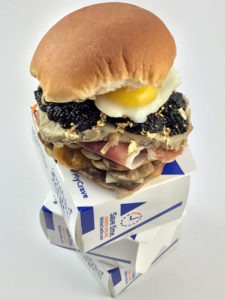 Remember when I spent $141.33 on the McEverything and tons of people got all worked up and complained about what a waste of money it was? Well, those people are really going to hate this!

This idea started out innocently enough, as a conversation with my buddy Jeff about how I couldn’t find anything to buy with the $250 Williams Sonoma gift card I had. Don’t get me wrong, there were plenty of cool kitchen tools that I would have liked, but because everything was so overpriced and so much cheaper everywhere else I felt bad buying any of them — even with a gift card.

Then I noticed that they sold truffles so I joked “Hey, for $200 I could get an ounce of white Italian truffles! Maybe I should just blow it all on that!” The conversation then turned to what exactly I would do with $200 worth of fancy truffles. I’m not even close to being a decent cook, so Jeff suggested beer battering and deep frying them. With how flavorful truffles supposedly are though — this is just based on what I’ve heard, because up until now I’ve never tasted, let alone even seen a truffle — I figured that I should, at the very least, try to use them in some sort of dish.

Eventually we decided that it would be hilarious if I bought these ridiculously priced truffles — the same ones that are used as an ingredient in some of the fanciest restaurant dishes in the world — and added them to a White Castle slider. The idea sort of just spiraled out of control from there when I decided to combine the truffles with every other insanely expensive food I could think of to create the most expensive White Castle slider ever assembled.

I started off by topping my slider with Pleasant Ridge Reserve and Hook’s 15 Year Cheddar, which sell for $25 and $80 a pound respectively. Since I only used a slice of each this didn’t add a ton to the total cost of the burger, but every other cheese I’ve ever had from Hook’s has been phenomenal so it was a good excuse to try their 15 Year Cheddar. As far as Pleasant Ridge Reserve goes, I’ve already had it numerous times, but I could honestly eat it every single day of my life and I’d still never pass up a chance to snack on some more.

On top of the cheese were the white Italian truffles, a couple ounces of prosciutto and then a slice of some duck foie gras and port wine pate bullshit thing that I picked up at a market near my work. Finishing off the slider was an ounce of Russian caviar and a fried quail egg. Oh, and I also sprinkled 24K gold flakes all over the entire thing just so it looked extra fancy. The only hipster food item that this thing was missing was morel mushrooms.

When it was all said and done the total cost of the slider you see pictured before you was exactly $400. Yep, $400 for a single bite (assuming you can handle truffles, prosciutto, caviar and foie gras all in one bite), which brings me to the taste of it… Terrible….

Seriously, for how hyped up truffles are I was definitely not impressed by them. Then again, I did just throw mine on top of a slider, so who knows how good they could have been in a risotto dish or even in some scrambled eggs. I was equally unimpressed by the foie gras and the caviar. Again though, those two things weren’t really intended to be combined or to be piled on top of a slider either. In fact, the only thing that really made it any better were the two Wisconsin cheeses that I added to it. Everything else just took away from the deliciousness that is the White Castle slider.

Oh, and in case you’re wondering what the other $50 of the gift card went towards, $21.99 of it went towards shipping, because apparently an ounce of truffles somehow costs Williams Sonoma $21.99 to ship. Seriously, I’d hate to buy something big like a blender or toaster oven from them. How much would shipping on that be? $8,000? On the plus side, they were pretty quick to send me some new truffles when UPS “misplaced” the first shipment. So, to whoever at UPS got my original truffles, I hope you put them to better use than I did! I spent the remainder on a sweet truffle shaver, because how the hell else was I supposed to slice them? With a crappy kitchen knife like some sort of amateur!?

So, although my $400 White Castle Slider ended up being a gigantic waste of money I’d be remiss if I didn’t admit that it looked goddamn beautiful. If I were Leonardo da Vinci this would be my Mona Lisa. If I were Shah Jahan it would be my Taj Mahal. In retrospect though I probably should have just spent the $400 on 20 Crave Cases from White Castle, or in other words, 600 sliders. With how much I love White Castle that many sliders could have fed me for at least four or five days! 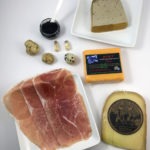 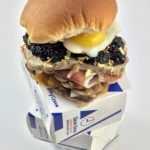 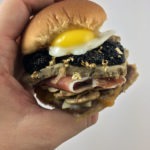