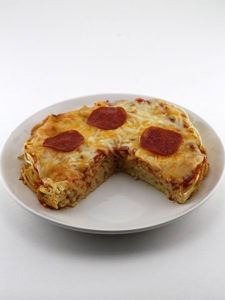 This idea came to me as I was making my Deep Fried Spaghetti Bun Burger. At the time I really had no idea how well spaghetti would work as a pizza crust because if the noodles aren’t cooked enough they won’t really hold their shape, but on the other hand if you overcook them in their pizza crust form you’re just going to end up with crunchy noodles, which nobody wants.

Well, I either got lucky or I’m finally getting pretty decent at making stuff in the kitchen, because this Spaghetti Crust Pizza turned out perfect!

To make it I cooked a package of spaghetti noodles according to the directions on the box, mixed in an egg — since I figured that this would help them stick together when I threw the whole thing in the oven — packed them into a circular 9″ springform pan and let them cool for about 20 minutes.

I then topped the spaghetti crust with some pizza sauce, cheese and pepperoni and put the whole thing — springform pan and all — into my 375° oven for about 15 minutes.

Once I removed my pizza from the pan is when the moment of truth really happened. I incorrectly assumed that it would either totally fall apart when I cut into it or the noodles would just be rock hard and completely inedible. To my surprise though not only did the noodles stick together, but the pizza was actually pretty damn tasty! So, although I may never achieve my dream of a spaghetti taco shell the idea has at least spawned a couple equally awesome creations. 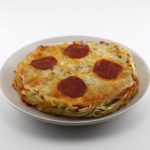 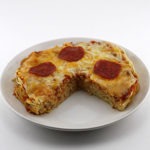 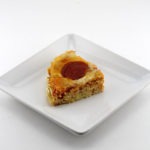