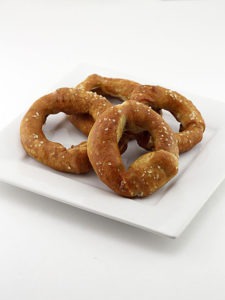 I know you’re probably all wondering how I came up with an idea as amazing as this one right? Actually it’s pretty simple, I had some dough left over after making my Macaroni and Cheese Stuffed Soft Pretzel Balls when I looked over and saw a sweet onion sitting on my kitchen counter staring back at me all bored-like so I said “Oh hey sweet onion, why don’t me, you and this pretzel dough get a little crazy and make some onion rings?”

To make them all I did was slice the onion horizontally into rings that were an inch thick and then wrap dough around them. I then dunked the rings in boiling water that had a tablespoon of baking soda added to it — which is what gives the dough its pretzel-like color and texture when you bake it — before letting them chill on a cooling rack for a few minutes. It was at this point that I also topped them with pretzel salt before I moved them to my 375° oven for 20 minutes.

Oh, and in case you’re wondering what I dipped these beauties in the answer is nacho cheese. Then again, the answer to “Hey Nick, what did you dip that piece of food into?” will almost always be nacho cheese, whether I’m eating soft pretzels or not.