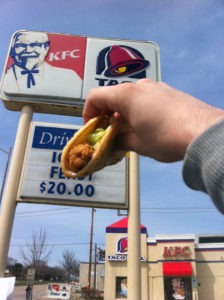 I wrote a couple weeks ago about how although I enjoy the fact that Yum! Brands (the parent company of Taco Bell, Pizza Hut and KFC) has created hybrid restaurants where you can buy food from more than one of their fast food chains at a single location I still wished they had some choices that combined foods from their multiple chains into a single item. I was even nice enough to get them started on the idea by creating the Triple Decker Personal Pan Taco.

Well, I still haven’t heard anything back from Yum! Brands about my idea. Who knows, maybe they’re just working on a marketing campaign for the new menu. Since these items would pretty much just sell themselves though that obviously can’t be it. The only logical answer is that they simply can’t think of any other new items, so I decided to create one more for them. After this they’re on their own though!

This time I went to a Taco Bell / KFC and purchased a Taco Bell chalupa and an order of popcorn chicken from KFC. The result? The Popcorn Chicken Chalupa, which is pretty much a regular chalupa except for the fact that it’s stuffed with deliciously crispy KFC popcorn chicken.

So, there you go Yum! Brands, I’ve created two great new menu items for you. All you need to do is think up a few more, start selling them and count all the money that comes in! 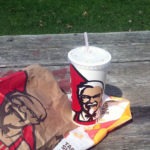 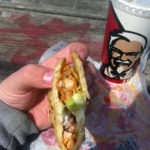 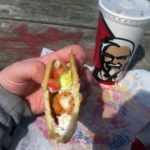 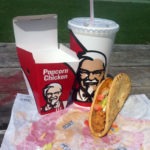 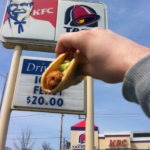 3 Comments on The Popcorn Chicken Chalupa