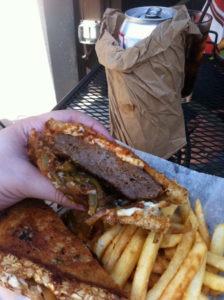 Until recently when I heard the term “Mafia Wars” all that came to mind was the annoying Facebook game that everyone except for me seemed to play at one point. After trying the Mafia Wars Melt at Club Charlies however the same phrase now brings to mind a juicy 1/2 pound burger served on five grain bread and topped with marinara sauce, mozzarella cheese, grilled onions and green peppers.

Even though the menu at Club Charlies lists this burger at half a pound I’m pretty sure that it weighs much more than that. Either that, or every other place that says they serve half pound burgers is lying. Seriously, look at the pictures and look at how thick the burger patty is! It’s huge!

Not only does Club Charlies have giant delicious burgers, but for the low price of $4 you can wash down your food with a 24 ounce can of Pabst, which comes served in a paper bag.

On a somewhat related note, whenever I’ve seen homeless people drinking beer out of cans or bottles that they kept in paper bags I always assumed that they were trying to hide the fact that they were drinking in public. That always seemed goofy to me because obviously if you see someone drinking something that’s hidden in a paper bag you know that they’re drinking alcohol right?

After sitting on the patio at Club Charlies on a sunny afternoon eating my Mafia Wars Melt and drinking a Pabst that was served to me in a paper bag however I’m starting to think that homeless people don’t do this to try and hide their beers, but instead because it keeps your beer colder for much, much longer. I can’t be the only person who just realized this can I? 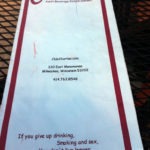 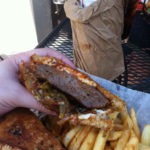 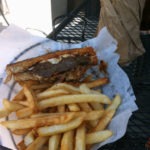 8 Comments on The Mafia Wars Melt