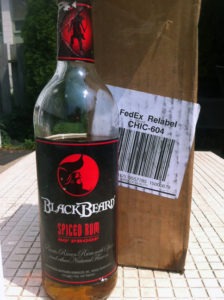 I’m just going to start this blog post off with a quick warning. If you’re planning on shipping a bottle of rum via FedEx there’s a good chance that even if you wrap it nice and tight with bubble wrap and affix a “fragile” sticker on it they’ll probably still somehow manage to crack the seal on the top of the bottle and leave you with a 3/4 full bottle of alcohol and a soggy box.

Seriously, how unlucky am I? I’ve gotten things like beer flavored candy and peanut butter and jelly sandwiches in cans sent to me to write about and those arrived fine, and then when an awesome company like Destilería Serrallés decides to send a bottle of their BlackBeard Spiced Rum to me to write about it arrives 1/4 of the way empty because FedEx can’t seem to ship things properly.

Regardless, I wasn’t going to let FedEx’s ineptitude stop me from enjoying the remaining rum that didn’t leak out into the box, and enjoy the rum I did! The remaining portion of the bottle, with it’s delicious hints of cinnamon, nutmeg and vanilla only lasted me a few hours before I finished it all. If that’s not a good indicator of the fact that this is a good rum then I’m not sure what is.Â  Actually, maybe that’s just a sign that I drink too much, but that’s neither here nor there.

The folks at BlackBeard Spiced Rum were also nice enough to include a couple sheets full of recipes along with the bottle of rum, but since those got soaked along with the box how about if I just tell you guys a pirate joke instead?

A pirate walks into a bar and the bartender says to him “Wow, you look terrible. What happened to you?

“What do you mean?” the pirate replied.

“Well, for one thing you have a wooden leg. You never had that before.”

“Yeah, I caught a bad case of scurvy and lost my leg.”

“What about that hook?” the bartender asked next. “The last time you were here you had two normal hands.”

“I lost my hand in a sword fight,” the pirate answered.

“OK, well what about the eye patch?” the bartender questioned. “Last time I saw you both of your eyes were fine.”

“One day there was a flock of seagulls flying over our ship and I looked up at them and one of them shat in my eye,” the pirate told him.

“Wow, and that caused you to lose your eye!?” the bartender exclaimed.

“Actually,” the pirate answered, “I just wasn’t really used to the hook yet.”

1 Comment on I Got Some Free Rum in the Mail!