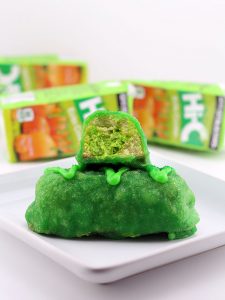 I still haven’t seen the new Ghostbusters movie — nor do I really intend to even though according to my wife it’s “hilarious” — but what really got me excited about its release was the fact that not only did they bring back my all-time favorite childhood drink Ecto Cooler to help promote it, but that they released some limited edition Key Lime Slime Ghostbusters-themed Twinkies as well!

If you happened to catch the Milwaukee episode of the awesome new travel / food / drinking show All Nighter then you already saw a very drunken me making these Ecto Cooler Battered Deep Fried Key Lime Slime Twinkies and combining them with mint custard, but seeing as how those were made at 3:30am after I had about ten Jack and Cokes I didn’t think to take any good photos of them. Luckily I still had a few of the Twinkies and an eight pack of Ecto Cooler leftover from that night so this past weekend I decided to  make them again and take some decent photos!

So you know how when you’re really drunk everything you eat pretty much tastes great?That’s what I was worried about with these. They tasted amazing during the All Nighter shoot, but would that all change when I tried them on a random Saturday morning? Nope, not all all! I’m happy to report that they were just as great sober as they were when I went through half a bottle of whiskey before eating them!

Oh, and it was also discovered while we were filming All Nighter that Ecto Cooler and really cheap tequila go together amazingly well! Seriously, try it and thank me later, but you better hurry because I have no idea how long it’ll be back in stores for! 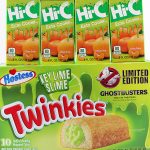 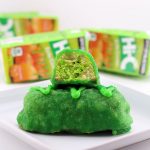 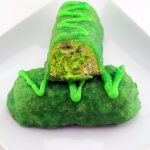