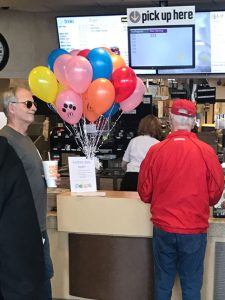 Welcome to another fun installment of Dumb Food Related Crap That Annoys Me. In case you missed the first one — which is completely possible since I wrote it almost two years ago — this is a column where I talk about — as you can probably guess — dumb food-related crap that annoys me.

Whereas in the first post I covered a multitude of topics — everything from meatless meatloaf to a turd from Australia who was sullying the DudeFoods name — I’m going to focus on one single topic this time: The people who place their order at fast food restaurants and then immediately stand directly in front of the food pickup area.

I work in an office and the places to eat around it are fairly limited so every single day at lunch I find myself eating some type of fast food. Now I don’t know if I’m unlucky or if I just work in an area where people have zero manners or what, but it’s the same story almost every day at lunch — I order my food, get my receipt and eagerly await my number to be called so I can scarf down my three McDoubles from McDonald’s or Original Chicken Sandwich meal from Burger King or whatever it is I’m clogging my arteries with that day. Finally my number is called and surprise surprise, there’s someone who ordered their food after me standing directly in front of the pickup area blocking me from getting my lunch.

How is there not some unwritten law that when you’re waiting for your food you just move a few feet back and get out of everyone else’s way? Standing at the counter staring at the people making your food doesn’t mean you’re going to get it any faster. All you’re doing is annoying every single person who ordered first who now has to ask you to move so they can grab their tray. How is it not common sense that if three people ordered ahead of you their numbers are most likely going to be called first and you’re going to be in their way if you’re just milling around at the counter?

Also, I’ve never worked in fast food, but I’m sure if I did it would annoy the hell out of me if people were just standing there staring at me as I assembled their Big Macs and McChicken sandwiches. These weirdos are treating the McDonald’s assembly line like it’s some sort of hibachi restaurant where you’re supposed to be watching the guy who makes the food. Just standing there waiting to see an onion volcano…. (If you don’t understand that reference you’ve probably never been to a Benihana)

Take the old guy in this photo that I snapped on a recent trip to McDonald’s for example. Five people — including me — ordered before him, so he knows damn well that those same five people are going to get their food first, yet he continues to stand there just getting in everyone’s way. The guy next to him looks like Bernie from Weekend at Bernie’s and I love that movie so I’m giving him a pass based on that, but the guy in the red windbreaker? No way. That guy is an idiot.

7 Comments on Dumb Food-Related Crap That Annoys Me: Part 2