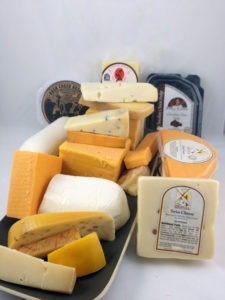 There are a lot of people out there who have a “bucket list,” or a list of things they want to do before they die. I have a similar list, with the only difference being that my list involves things I want to write about on my blog at some point. One item has been at the very top of that list for over a year now, and last weekend I finally made it a reality.

The problem with my idea, and the reason it didn’t come to fruition any earlier than it did, was that I didn’t really know of any grocery stores or cheese shops that I could go to and buy small quantities of every single Wisconsin cheese that they had without them getting extremely annoyed with me. Then I was introduced to a shop in Madison, Wisconsin called Fromagination that sells “cheese orphans.” What are cheese orphans you ask? Basically, when a wheel of cheese is cut there are a bunch of smaller sized pieces of cheese left over that each weigh in at around 1/5 of a pound. In other words, they were absolutely perfect for my pizza!

Armed with a bunch of cheese orphans from Fromagination, a few different cheeses that I already had in my refrigerator and a few more that I picked up at my local grocery store I grabbed my cheese shredder and got to work. When it was all said and done I had spent almost an hour shredding a total of 19 different cheeses into what turned out to be a towering six pound pile of dairy delight. I then placed a call to Domino’s and ordered a large Wisconsin 6 Cheese Pizza.

When the Domino’s delivery driver showed up at my house 35 minutes later with my pizza I couldn’t wait to open it up. I’d never even tried the Wisconsin 6 Cheese Pizza until then, so I was anxious to check it out. Looking inside the box however I was actually a little disappointed with the amount of cheese on the pizza. Even though it contained six different cheeses it didn’t really even seem like it had any more cheese than a regular pizza, which I sort of expected it to. Luckily I had six pounds of shredded cheese to add to it!

After piling the 19 additional cheeses onto my pizza (which ended up measuring almost three inches in height) I put it back into the oven and awaited with eager anticipation as the cheese melted. After about twelve minutes my pizza was ready to slice into. I immediately ran into a problem however as my pizza cutter was completely useless when it came time to slice through all the added cheese. My semi-crisis was easily averted however when I grabbed a pie knife and instead used that to slice through my pizza and dish myself out a piece of the gooey goodness.

The crazy amount of cheese on my pizza made it extremely greasy, and nearly impossible to eat without using a knife and fork, but overall it actually wasn’t too bad. Considering the varying flavors of all the different cheeses on the pizza I actually expected it to taste terrible, but that wasn’t the case at all. Granted, it was WAY too much cheese to eat more than two slices in a sitting, but everything actually blended together fairly well. The fact that the eight slices weighed in at over 3/4 of a pound each was also pretty detrimental when it came to finishing this pizza, but after five separate meals the Wisconsin 25 Cheese Pizza was no more!

Would I make the pizza again? Probably not. Not because it wasn’t good, but mainly because buying six pounds of various fancy Wisconsin cheeses is sort of expensive. Either way though, I’m glad that I can finally cross the Wisconsin 25 Cheese Pizza off my blog bucket list! Next up on my list? The McEverything, which basically involves me going to McDonald’s, buying every single menu item they have and combining it all into one ridiculous sandwich.

Oh yeah, and for all you foodies out there wondering which 19 Wisconsin cheeses I added to my pizza here’s a complete list, along with the names of the companies that produce them: 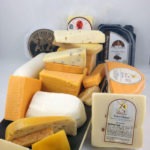 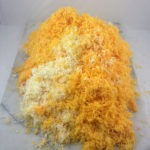 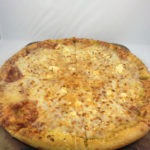 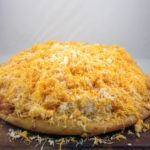 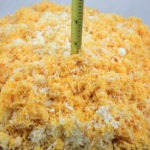 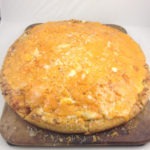 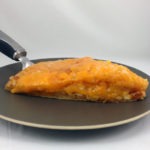