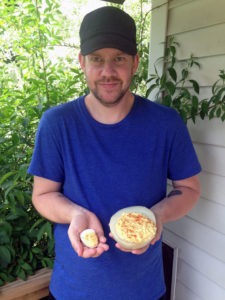 I’ve wanted to make Deviled Ostrich Eggs forever. I have a friend who works at a zoo who was supposed to grab me a couple ostrich eggs so I could make it happen, but when one ostrich egg is equivalent in size to about 24 chicken eggs sneaking them out of your place of employment can be pretty difficult I’m guessing.

There are a few ostrich farms that sell eggs online, but every time I contacted one of them it seemed like it either wasn’t egg laying season or they were already sold out of eggs. Recently though I was browsing through all the ostrich farms that I had bookmarked on my computer and lo and behold, one of them actually had some eggs to sell!

Once my ostrich eggs arrived I immediately ripped open the box and the first thing I noticed was how thick the egg shells were. They came wrapped in tons of bubble wrap, but honestly, the UPS guy probably could have kicked them straight to my door like a soccer ball and I’m sure they still would have arrived intact. I actually had to use a small hammer to crack open the shell after hard boiling the eggs. That’s how durable these things are.

When it came time to hard boil my ostrich eggs I really had no idea how long they had to sit in the boiling water for before they’d be ready to become deviled eggs. Luckily the farm that I bought them from sent along a little instructional sheet on hard boiling them that recommended that they be submerged in boiling water for two hours, which turned out to be the perfect amount of time. Even with the biggest pot I had though the water still barely covered the egg, so as the boiling water evaporated I had to continually add more to the pot.

Aside from that though everything was pretty much the same as making normal deviled eggs. The ostrich eggs were a little more off white in color than regular eggs, but tasted almost exactly the same. The only part that was sort of weird about eating my Deviled Ostrich Eggs is that I’m used to eating a regular deviled egg in one or two bites and eating six or seven deviled eggs at a time. One of these took me about 30 bites to eat and pretty much filled me up for the entire day. 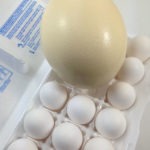 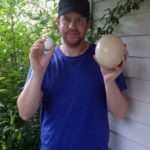 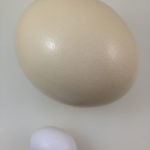 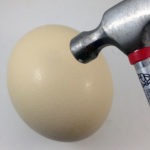 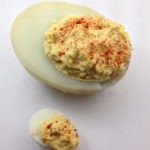 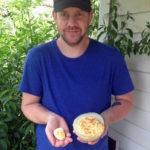