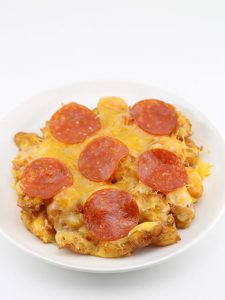 This is the third recipe / video in a series of four that the Wisconsin Milk Marketing Board asked me to do to help spread the word about their Summer of Curds promotion where until September 21st they’re giving away a cheese curd prize pack — including a pound of deliciously squeaky Wisconsin cheese curds — every single day.

Everyone agrees that pizza with cheese stuffed into the crust is awesome right? The only problem with it is that you have to eat through the entire slice just to get to the part that’s packed with cheese. I’ve remedied this in the past by making a pizza where the entire crust was just a deep fried wheel of cheese and it definitely helped, but to say it was a little difficult to eat would be an understatement. The second I sliced into it cheese basically just went everywhere. With this Deep Fried Cheese Curd Crust Pizza I think I’ve found the best of both worlds.

Since deep fried cheese curds are used instead of one giant wheel of cheese you still get tons of delicious cheese in every single bite, yet you’re actually able to cut it into slices that stay together. In a way it’s sort of like a souped up version of the Cheese Ball Crust Pizza I made a year and a half ago.

The one caveat is that instead of adding the sauce to the pizza it works much better if you simply add your cheese and toppings and then dip the slices in sauce as you eat them. Trust me, the first time I tried making this pizza I added sauce to it prior to putting it in the oven, which sort of just turned it into a gooey mess. Don’t get me wrong, it was a delicious gooey mess, but it was a mess nonetheless. Dipping it in the sauce after cooking though? Perfect!

If you want to make your own Deep Fried Cheese Curd Crust Pizza just head over to EatCurds.com for the recipe and while you’re there make sure to enter their contest where you can win a pound of fresh Wisconsin cheese curds, an EatCurds.com t-shirt, a cheese curd can koozie, magnet and a coupon for even more curds (because when you finish your first pound of cheese curds the only thing that’s going to be on your mind is how much you want another pound of cheese curds).