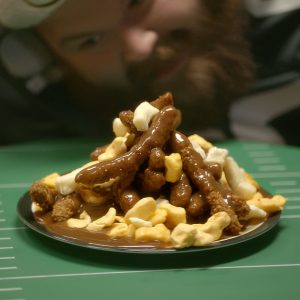 Recently I partnered with two Wisconsin companies, Pick ‘n Save and Johnsonville to create a series of over-the-top Gameday Grub videos celebrating everything we love about Wisconsin.

Last week I shared the first one with you — Andouille Mac & Cheese Pie with Bacon Weave Crust — and now I’m back with the second — Brown Gravy and Cheese Curd-Smothered Brat Sticks!

In the past, I’ve diced up brats, breaded them with crushed pretzels and deep fried them and they were amazing. This time though I switched things up by slicing them lengthwise so they were shaped more like French fries. Then, just to take the dish to the next level I decided to turn it into poutine by topping a pile of brat fries with cheese curds and gravy.

If you don’t have cheese curds readily available to you, (first off, I feel extremely sorry for you because there’s nothing better than biting into a fresh, squeaky cheese curd) the closest thing would probably be diced chunks of mild cheddar cheese. It won’t taste quite the same, but it will at least be close. Skip shredded cheese as a substitute though.

What’s great about cheese curds in poutine is that they soften, but don’t melt completely, so you don’t just want a bunch of melted cheese mixed in with your gravy. Some cheese is definitely better than no cheese though!

If you’d like to make Brown Gravy and Cheese Curd-Smothered Brat Sticks for yourself the recipe is below! Enjoy!