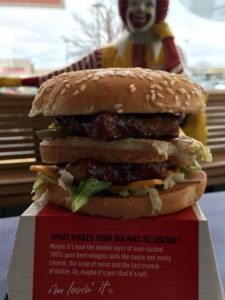 I was telling my buddy Jeff how I’d somehow gone my entire life without eating a McDonald’s McRib sandwich — which in itself is crazy since I’ve literally eaten every other sandwich on their menu  — when he mentioned how when he was 16 and used to work for the fast food chain they’d take Big Macs and replace the two hamburger patties with McRib patties. After hearing this I knew that I needed to try one of these Big Mac / McRib combination sandwiches. This would be my year! The year that I finally feast upon the McRib!

Back when I was a kid the school cafeteria would serve some sort of McRib type sandwich to us once every couple weeks for lunch. I think they actually called theirs a McRib as well now that I think about it, which I’m sure McDonald’s wouldn’t be too happy with, but then again I doubt they’re really looking to go after Highland View Elementary School for trademark infringement.

Anyway, I was never a fan of these imposter McRib sandwiches, and maybe that’s part of the reason why I never tried an actual one until now. All I can think after finally eating one  is what the hell have I been waiting this long for?

The McRib is goddamn delicious! Now I know why people freak out every single time it comes back. The sweet and tangy BBQ sauce, the slivers of onions and the imitation grill marks. It’s pretty much perfect. Alright, the imitation grill marks don’t exactly add to the taste, but still…. On a Big Mac bun with lettuce and special sauce though it’s even better.

With how iconic the Big Mac is I’m really surprised that McDonald’s doesn’t offer different variations of it like Burger King has done with their Whopper. Sure, if you’re in India you can get one that has chicken patties instead of ground beef patties, and I’m sure other countries have their own unique variations as well, but here in the United States we really just have one option unless we assemble their own like I did with McRib patties.

Either way, I’m super psyched that I finally took the plunge and tried the McRib, so Jeff, thanks for the suggestion! Oh, and McDonald’s? You’ll be seeing me again real soon, because I have no idea how long the McRib will be around for this time, but I’m definitely not waiting until next year to try another one!

Also, just for fun, here are a few other random things I’ve never done in my life:

I’ve never seen any of the Star Wars Movies – I mean, at this point I already know the story just from hearing about them since I was a kid and I don’t really feel like investing over 13 hours to watch six movies that I already know the premise of. Plus, there’s a new one coming out soon so at that point I’ll be seven movies behind.

I never learned how to ice skate – When I was a kid I convinced my mom that I wanted to play hockey, so she bought me a brand new pair of skates and took me to the frozen pond at the park near her house so I could try them out. I laced them up, stepped onto the ice and immediately fell down. I then got back up, took them off, walked back home and played Nintendo. I never attempted skating again.

I’ve never been out of the country – Yep, I’ve never been out of the good ol’ US of A. Every time I go on vacation I pretty much end up in Vegas drinking for a couple days straight and losing tons of money gambling. Then on the flight home as my head is pounding from 48 straight hours of excess I swear off Sin City, telling myself I’ll never come back. After I’ve been gone for a couple months though I usually get a flyer in the mail or an email from one of the hotels there offering me free rooms and begging me to come back and like a sucker in some sort of abusive relationship I happily oblige.

Plus, this past June I was out there with my buddy Allen and I won $5,500 playing a Willy Wonka slot machine — the first Vegas trip I’ve ever come home with more money than I arrived with by the way — and apparently if you lose all your winnings before the year is up you don’t have to pay taxes on them. If I can’t have it no one can!

I call this my Latrell Sprewell plan. Latrell Sprewell for those of you who are unaware is an ex-NBA star who famously beached his luxury yacht on the coast of Lake Michigan just so US marshals couldn’t repossess it to cover the payments he stopped making on it months earlier.

He also at one point turned down a 3-year, $21 million contract extension because he felt “insulted” by how low the offer was and then added that “I have a family to feed … If Glen Taylor (the owner of the Minnesota Timberwolves, who were the ones offering Sprewell the $21 million) wants to see my family fed, he better cough up some money. Otherwise, you’re going to see these kids in one of those Sally Struthers commercials soon.”

*prices not valid in Alaska and Hawaii