I have no idea why, but I’ve been on a bit of a s’mores kick lately. Last month I made some s’mores using s’mores Pop-Tarts instead of graham crackers, and a couple days ago I made these Bacon Weave S’mores.

Why bacon you ask? Well, chocolate covered bacon has been a thing for a while now and as you can probably tell from back when I created a Bacon Weave Choco Taco, I’m a huge fan of salty and sweet combinations, so combining little squares of bacon along with Hershey’s Chocolate and marshmallows was really a no-brainer for me.

Much like the s’mores that I made using Pop-Tarts I preferred these to traditional s’mores. I’ve never been a huge graham cracker fan, especially when it comes to s’mores because they always just seem to break apart. It’s much, much better to have something like a Pop-Tart or a bacon weave that completely stays together as you’re eating. 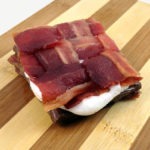 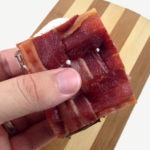 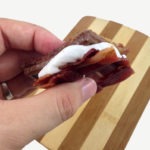