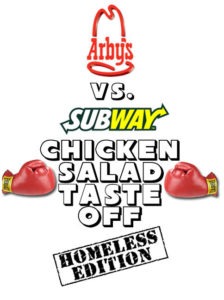 I received an email from Arby’s about a week ago asking me to try their new Market Fresh Grilled Chicken and Pecan Salad Sandwich. They didn’t just want me to try their sandwich however, they also wanted me to try Subway’s Orchard Chicken Salad Sub and then write about which one I thought was better. Seeing as how I always hate to pass up a free meal I immediately replied and told them I’d be more than happy to write a review.

A few days later I received an Arby’s gift card and a Subway gift card in the mail and I got to thinking; how could I be impartial in a taste test like this when I knew who was sponsoring it? That’s when I decided to hit the streets of downtown Milwaukee to find someone to eat the sandwiches for me and pick a winner.

On my way downtown I stopped and picked up a Grilled Chicken and Pecan Salad Sandwich and a Grilled Chicken and Pecan Salad Wrap from Arby’s and a Footlong Orchard Chicken Salad Sub from Subway. Arriving downtown I stopped at Walgreens to buy some gum and that’s where I came across Johnny. He asked me for some change and I offered him the sandwiches instead.

Wanna try the new Arby’s sandwich for yourself? If you head over to their Facebook Page you can get a coupon for a free Market Fresh Chicken Salad Sandwich with the purchase of a 22 oz. drink, which is a pretty sweet deal if you ask me. They’re also donating $1 to Share Our Strength’s No Kid Hungry Campaign for every Chicken Salad Taste-Off vote on their Facebook page. As if all of that wasn’t already enough Arby’s was also nice enough to give me three $5 gift cards to give away to my readers, so if you want one just leave a comment on this post and you’ll be entered!

Update: Leave it to the lawyers to make everything a little less fun. The Arby’s legal team has asked me to blur the logo on the beer cans in my pictures below and to remove the reference in my blog post to what type of beer Johnny prefers. If you’re really wondering what beer it was though it rhymes with “Ratty Dice…” 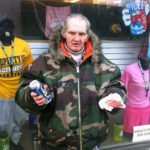 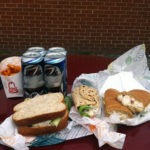 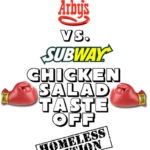