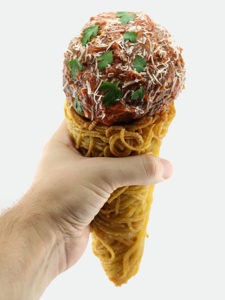 Back when I made Spaghetti Fries I mentioned how my buddy Kyle A.K.A. The Vulgar Chef and I had both been attempting to make  Spaghetti and Meatball Tacos but that he beat me to it.

Since then I’ve wanted to make a Spaghetti and Meatball Cone and seeing as how he already perfected the whole forming spaghetti into a shape and baking it thing I figured that I could just pull a BuzzFeed — the folks at BuzzFeed Food are notorious for ripping off ideas from food bloggers without crediting them in case you don’t get the reference — and just copy what he did but do it in cone form. I guess I didn’t technically pull a BuzzFeed since I credited him, but whatever, you get the idea.

I started off by cooking some spaghetti according to the directions on the box and mixed in a few eggs with the noodles. I then spread the spaghetti onto a baking sheet and put it in my 400º oven for ten minutes.

After letting the noodles cool for half an hour or so I cut out a large triangle type shape, rolled it around a metal cone form I have and wrapped it in aluminum foil. Kyle finished off his Spaghetti Tacos off by throwing them back in the oven at 450º for 20 minutes, but I tried that with my cone and it wasn’t staying together very well so I made a new one and just dropped it in my deep fryer for 90 seconds for the final step, which seemed to do the trick!

The original plan was to fill my cone with a bunch of little meatballs, but I decided that doing so would cause way too much wasted space inside of it so I packed it with meat sauce instead. I was also a little worried about sauce leaking out of the bottom of the cone so I plugged it with a mini meatball before filling it and it worked like a charm!

I finished off my cone with a giant one and a half pound meatball that I topped with sauce and freshly grated Parmesan cheese. The huge meatball might have been a bit of overkill, but I wanted it to resemble an actual ice cream cone and when you’re filling an ice cream cone you don’t just fill it to the top and level it off, you fill it to the top and then add a ridiculously gigantic scoop of ice cream to it.

The Spaghetti and Meatball Cone ended up being everything I hoped for and then some. It was delicious and prior to taking my first bite I held it up high, pointed it East towards the Vulgar Chef’s house and silently toasted him. Thanks Kyle! You’re a true inspiration to us all!

3 Comments on The Spaghetti and Meatball Cone