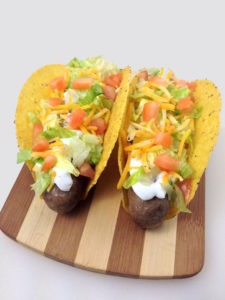 The Milwaukee Bucks are currently running a contest called the Bucks Best Brat Contest where fans can submit their crazy bratwurst ideas for a chance to have their brat featured at the BMO Harris Bradley Center concession stands and win four courtside seats to a Bucks game as well as Usinger’s brats for a year.

I came up with a ton of different ideas for the contest, but just couldn’t seem to decide on a favorite so I decided to make three different brat inspired creations.

I didn’t really read the contest rules, so for all I know it could be limited to one entry per person and I could very well already be disqualified, but on the plus side I got to spend a good portion of my weekend eating brats, which was pretty awesome.

My first entry is Brat Taco which you can see pictured above. My original plan was to chop up the brats into small pieces and fill the taco shells with them, but then I realized that the Usingers brats that I cooked fit perfectly into the taco shells. It’s almost like they were made for one another. After that all I did was top the brats with some sour cream, shredded cheese, lettuce and tomato.

I was trying to come up with a catchy name for these and couldn’t decide if each one should be called a Braco or a Bratco. The extra T in Bratco sort of makes it sound like the name of a company that would sell brats or something. “Bratco, we’re number one when it comes to brats!” I don’t know, maybe I should just keep it simple and call them Brat Tacos. 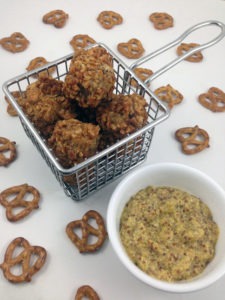 For my second entry I made some Deep Fried Pretzel Breaded Brat Bites.

In a way they’re sort of similar to the hot dog bites that you can often find at movie theaters and sporting events, but with brats in the middle rather than hot dogs.

Oh, and instead of a corn dog type breading they’re breaded in crushed up pretzels, which as it turns out is an absolutely perfect combination.

I added some stone ground mustard for dipping purposes and my Deep Fried Pretzel Breaded Brat Bites were complete! I seriously couldn’t stop eating them. 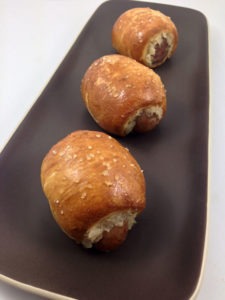 I took some brats, chopped them in half, topped each one in sauerkraut and then wrapped them in fresh, homemade pretzel dough before baking them in my oven. The result is sort of a German version of Pigs in a Blanket, and they’re seriously delicious!

This was also my first foray into making homemade pretzels, which as it turns out are actually way easier to make than I expected. There was a small kitchen fire in the process as the wax paper that was covering the dough as it was rising got too close to a flame on my stove, but it wasn’t anything I couldn’t handle!

See, how can I be expected to pick just one entry with three things like this sitting in front of me? Plus, on top of those I had plenty of other ideas that didn’t even make the cut. Here are a few of them:

The Brat Wellington – This would have been exactly like Beef Wellington, but with a brat in the middle instead of beef.

German Pancake Wrapped Brats – This was the idea that my soft pretzel wrapped brats evolved from. My original plan was to make a few German pancakes and wrap those around some brats and then add some sort of filling to them as well.

The BratWorks – This would have been a brat that was just topped with every single thing I had in my refrigerator. I still think it’s an awesome idea, but I just figured that someone somewhere has had to have already used that name for a brat with tons and tons of toppings.

A Beer and Bacon Battered Deep Fried Brat on a Stick – This would have been a brat that was deep fried in the same batter I used to make Deep Fried Krispy Kreme Doughnuts and Deep Fried Doritos. The only reason I didn’t make this one was because I couldn’t find any corn dog sticks at the grocery store and didn’t feel like driving to another store to look for some.

The Bratrito – A brat wrapped in a tortilla with a ton of burrito stuff in it. My Brat Tacos turned out awesome though, and seeing as how this is almost pretty much the exact same idea it seemed pointless to make this one too.

So, wish me luck!  Oh, and if you think you’ve got a great idea for the contest you can head on over to the Bucks Best Brat Contest page and submit your own creation. Hurry up though, because they start choosing their finalists this Wednesday, March 19th!