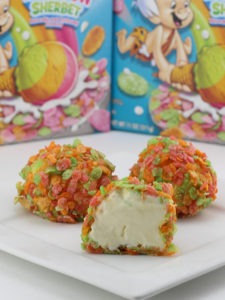 Back in April I made a Fruity Pebbles Ice Cream Cone and upon seeing it Post Foods — the company that makes Fruity Pebbles — shipped me a box full of swag as well as some cereal, including Cocoa Pebbles.

I started off by scooping some ice cream onto a plate and then putting it into my freezer for about 15 minutes so it could harden back up. Next, I dipped each scoop of ice cream into an egg wash and then rolled them around in Ice Cream Pebbles before putting them back in my freezer once again for 30 minutes. Then, just to be sure that my ice cream had a thick enough breading and wouldn’t just completely disintegrate when I dropped it in my deep fryer I followed that same process two more times. Once the oil in my deep fryer was heated up to 375° I dropped the ice cream balls in for about 20 seconds each and after that they were ready to eat!

The worst part about writing about deep fried ice cream is trying to get decent photos of it before it completely melts. In addition, all I could think about as soon as I pulled these out of my deep fryer was how badly I wanted to eat them. I’ve deep fried a ton of food in my day, and none of it has ever smelled as good as these Ice Cream Pebbles did when they were frying in the scorching hot oil. So, I snapped a few quick pictures and then proceeded to devour all three Ice Cream Pebbles Breaded Deep Fried Ice Cream balls in approximately 15 seconds. Seriously, I’m pretty sure that I finished them in less time than they spent in the deep fryer. They were delicious! 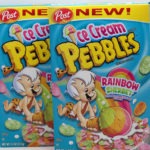 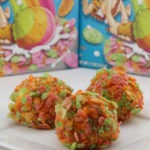 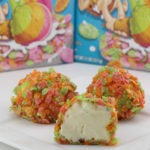