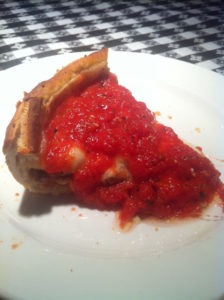 Who says that you have to go to Chicago to get decent deep dish pizza? Edwardo’s (which actually has seven locations in and around Chicago) has been serving up delicious pizza in Milwaukee for years, and even though they’re now down to just one Milwaukee location their pizza is still just as good as ever.

Technically the pizza at Edwardo’s is “stuffed” and not “deep-dish,” with the only difference being an extra thin layer of dough near the top of the pizza. Aside from that though the difference is negligible.

The one thing I don’t really understand about Edwardo’s is the weird pizza crust like appetizer that they give you when they bring your drinks out. If you’ve never been to Edwardo’s check out the picture below to see what I’m talking about. It tastes like they just bake some plain pizza crusts, let them sit around for a couple days getting nice and hard and then break them up into small pieces and toss them in a basket. Does anyone really even eat this stuff? They could at least give you some marinara sauce along with this stuff for dipping purposes or something. 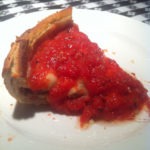 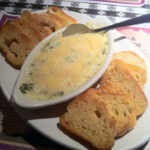 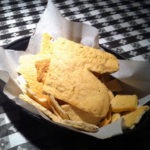