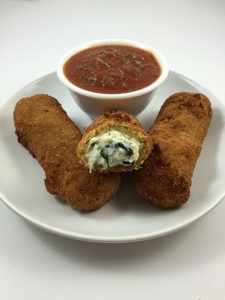 I was about to get down with some homemade ricotta and spinach stuffed cannelloni for dinner the other night when I thought to myself “Man, it’s been way too long since you’ve used your deep fryer!” So, after a quick search through my kitchen cabinets where I came across some Italian style breadcrumbs I decided to deep fry those bad boys instead!

Cannelloni for those of you who get a majority of your Italian food knowledge from your dinners at Olive Garden are cylindrical noodles — similar to manicotti — that are often stuffed. That’s totally not a knock against Olive Garden by the way. I love the Never Ending Pasta Bowl as much as the next guy and usually gain about ten pounds every time they bring it back. In college my buddies and I would actually go there and have eating contests whenever the Never Ending Pasta Bowl promotion was running.

Oh and while we’re on this whole explaining what cannelloni are kick make sure that you don’t confuse them with cannellini, because if you accidentally order cannellini instead of cannelloni you’re gonna be real bummed when a bowl of crappy white beans shows up at your table. If you confuse them with cannolis on the other hand you’ll probably still end up fairly happy though because cannolis are easily one of the greatest desserts ever invented.

Anyway, these were awesome. All I did was mix up some ricotta cheese and some spinach in a bowl and stuff it into some cooked cannelloni noodles. Then, I dredged them in flour, an egg wash and last but not least, the Italian breadcrumbs. After that I just dropped them into my deep fryer for about 45 seconds until they were a nice golden brown.

Had I not run out of noodles I probably could have eaten about 50 of these. They were sort of like an amped up awesome version of mozzarella sticks. In fact next time I think I’ll add some mozzarella cheese to them as well!