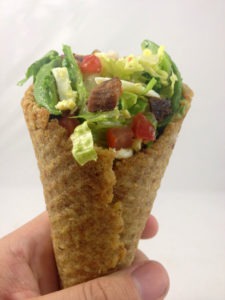 I have no idea why, but I really love eating food out of cones. This is evidenced by the fact that I’ve already made and written about a chicken and waffle cone, a pizza cone and my favorite, the Tacone. This time I’ve created something a little more healthy than you’re probably used to reading about here at DudeFoods, but you know what? That doesn’t make it any less delicious!

What you see here is a cone stuffed with Cobb salad. It isn’t just any cone however, it’s a cone made out of crushed up croutons! It actually took me a few tries to make my crouton cone and I considered throwing in the towel before my final attempt at it, but I decided to give it one more shot and it turned out wonderfully!

I made the cone by combining half a cup of finely ground croutons with an egg and a teaspoon of olive oil. I rolled the mixture into a ball, put it in my waffle cone maker and pressed down as hard as I could. A minute later I took it out, wrapped it around my waffle cone roller, surrounded it with aluminum foil and put it in my oven for ten minutes at 400° to complete the cooking process. Ideally I would have liked to cook it for a few more minutes so the cone got a little crunchier, but my waffle cone roller started melting. I guess that’s what I get for putting plastic in the oven though….

After letting my cone cool I filled it with chicken, bacon, avocado, tomato, diced hard-boiled eggs, blue cheese and of course, lettuce. I then drizzled vinaigrette dressing over everything and took a bite. It was pretty amazing. Normally I don’t even like croutons because they always end up either too soft or WAY too hard, but this cone was sort of the perfect medium. At this point I’m also starting to think that there isn’t a single food out there that isn’t better in cone form…. 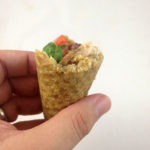 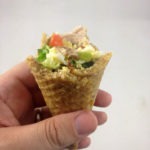 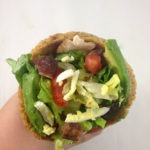 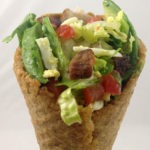 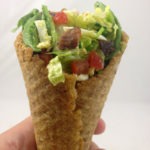 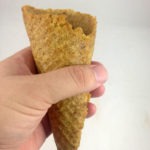 26 Comments on Cobb Salad in a Crouton Cone