The Wisconsin State Fair wrapped up yesterday and as I stopped down for one final day of eating deep fried foods, foods on sticks and deep fried foods on sticks I got to thinking about what sort of crazy concoctions I would sell if I ever somehow got my own stand there. Well, here’s my first idea! Beer and Bacon Battered Deep Fried Krispy Kreme Doughnuts!

I started of by picking up two different varieties of Krispy Kreme Doughnuts — Original Glazed and Maple Iced Glazed. I then whipped up a nice beer batter — half flour and half beer in case you want to make your own at home — and then sprinkled in some crushed up pieces of Hormel Black Label Maple bacon. Then, one by one I dunked the doughnuts in the batter, topped them with even more bacon and dropped them into my deep fryer.

Although both types of doughnuts were absolutely delicious I’d have to give a slight nod to the ones that were Maple Iced Glazed because they paired with the maple flavored bacon just a bit better. I’d happily eat either of them again in a second though!

The only thing that could possibly top Deep Fried Krispy Kreme Doughnuts would be Deep Fried Bacon Maple Crong Johns, but then again, battering and deep frying a Crong John would probably defeat the purpose of using crescent roll dough in the first place because the doughnut would no longer be light and fluffy. 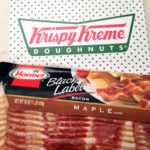 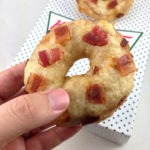 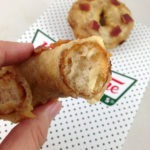 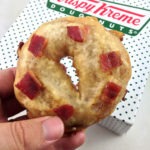