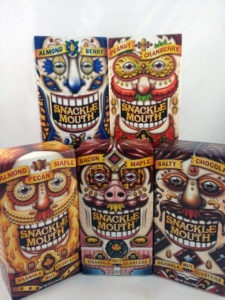 I’ve mentioned before that lots of companies send me food in hopes that I’ll mention it here on DudeFoods. A lot of the stuff I get though just doesn’t quite fit too well with what I normally write about. Take for example the five tins of sardines that I received recently. I’m pretty sure that I’ve never even eaten a sardine before and honestly, I have no idea what to do with them.

Normally something like granola nut clusters would fall into the exact same category as sardines as far as foods I’d have zero interest in mentioning on my blog, unless of course they come in a Bacon Maple flavor like the ones that Snackle Mouth sent my way a couple weeks ago do!

The company actually offers five different varieties of their mixture of nuts, granola and other assorted ingredients, but anything with bacon in it usually gets an automatic bias from me. Once I finished my box of Bacon Maple nut clusters (a day and a half after I got them) I cracked open the four other boxes and realized that all the other flavors are pretty good as well.

What’s really great about their Bacon Maple flavor though is that they use actual cooked bacon in their mix, not just some crappy bacon flavoring. Unfortunately, the Bacon Maple and Salty Chocolate flavors (which were my two favorites) won’t be available in stores until later this summer, but in the meantime you can snack on Almond Berry, Peanut Cranberry and Almond Pecan Maple.

If you want to try Snackle Mouth for yourself you can purchase it online at Abe’s Market. I’ve also seen it at the Fresh Market near me and it looks like you can find it at select Whole Foods locations as well. Oh yeah, and if you have any recipes that contain sardines that you think I might like just send them my way! I need to get rid of those things! 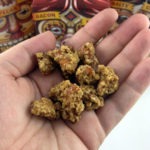 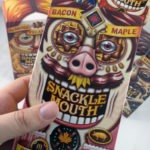 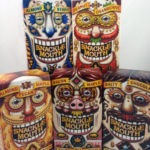