You know what goes great with pig? Even more pig! That’s why when Hormel recently sent me one of their Cure 81 hams I decided to do the only logical thing I could think of – I grabbed a package of their Black Label Brown Sugar Thick Cut Bacon, wove it together and wrapped it around the ham!

I mean, if you’re already making a ham you might as well put as much of the rest of the pig to good use as well right?

The great thing about these Cure 81 hams is that they come pre-cooked, so if you wanted to you could just immediately open one up and start eating it, but if you want to make them really good wrapping them in bacon is the way to go!

Now, in doing this you can take the easy way out and just drape some strips of bacon over your ham and throw it in the oven, but if you really want to make sure that you’re getting maximum bacon exposure In each bite what you’ll really want to do is weave your bacon together before covering the ham with it. Not only does this cover as much of the ham as possible, but it also holds the bacon strips together so they won’t fall off the ham as they shrink when cooking.

Want to make your own bacon wrapped ham? Here’s how:
1. Place the cut surface of the Cure 81 Ham face down in a baking pan and add one cup of water.
2. Take a package of Hormel Black Label bacon, weave it together on a separate plate and flip the plate upside down over the ham so the weave covers the ham.
3. Cover the pan with aluminum foil and bake the ham at 325° for 15 minutes per pound.
4. Enjoy your delicious dinner and listen to your family rave about how it’s the greatest Easter ham they’ve ever eaten!

In the end my bacon wrapped ham ended up being the juiciest, most delicious ham I’ve ever eaten. I’m sure that the fact that there was bacon grease dripping down on it the entire time it was in the oven helped, but Hormel made the bacon as well so either way, they’re the ones responsible for the tastiness. I know it probably sounds like they’re paying me to say all this or something, but the only payment I’ve received thus far is pounds upon pounds of their mouthwatering bacon, which in my world is just as good as cash anyway!

Oh and Hormel, feel free to send me any more ham, bacon or any other sort of salty snacks you have! You’ve got my address! 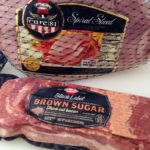 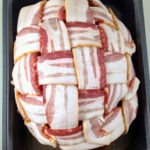 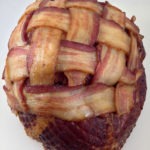 5 Comments on Easter Dinner Idea: Wrap Your Ham in a Bacon Weave!