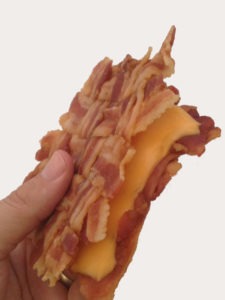 After realizing how well bacon and melted cheese go together when I made my bacon weave pizza a little while back this idea seemed like a no-brainer. Yep, the bacon weave is once again making it’s triumphant return to DudeFoods and this time it comes in sandwich form!

Instead of one bacon weave I made two this time, each of which was roughly the size of a piece of bread. Instead of putting them in the oven like I did with the bacon weave pizza though I decided to cook my bacon in the microwave this time. I don’t necessarily prefer one cooking method over the other, I was just really, really hungry and didn’t feel like waiting for my oven to preheat. Once they were done I threw them into a pan on my stove with a couple slices of cheese between them and waited until it melted into gooey perfection.

The trick with a bacon weave grilled cheese is that you want the bacon crispy enough to eat prior to adding the cheese, but not too crispy to the point that the extra few minutes on the stove will burn it. I cooked my two bacon weaves in the microwave for five minutes each and they turned out perfect, but it will obviously differ based on the type of bacon you use so your best bet if you want to make your own is to check on it after three minutes and then cook it in 30 second increments after that until it’s done.

Alright, this is the part of the blog post where I should probably tell you how the bacon weave grilled cheese tasted right? Do I really even need to though? I mean come on, just look at it! It’s melted cheese between two squares of bacon so obviously it was delicious! In fact, after this and my bacon weave pizza I’m seriously considering switching to a low carb diet. Not because I want to lose weight though, but because I’m hooked on bacon weaves and because things like bread and pizza crust can’t even compare to them in terms of taste! 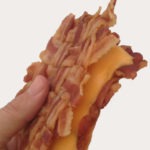 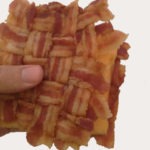 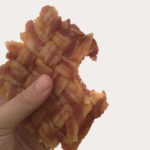 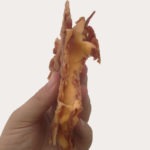 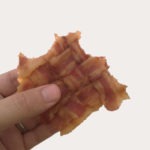 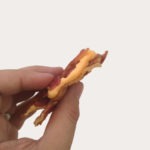