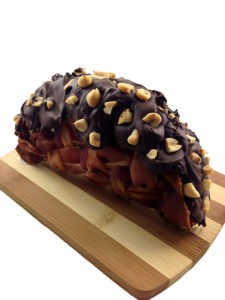 Chocolate covered bacon has been done before, as have bacon weave taco shells, but until now they’ve never been combined to make a Bacon Weave Choco Taco!

A Choco Taco — for those of you who have never had the pleasure of trying one — is one of the best desserts in the entire world. It consists of a waffle cone taco shell that’s filled with vanilla ice cream and fudge and then topped with milk chocolate and peanuts. If you’ve never eaten one you’re seriously missing out.

I started by weaving a bacon square, cooking it, cutting it into a circle and then hanging it over a few kabob sticks so it would keep its shape. I then baked the shell in my oven until it was crispy, let it cool down a bit and then filled it with a vanilla ice cream that included fudge swirls.

After leaving my ice cream filled bacon weave shell in the freezer for about 30 minutes so it could harden back up I melted some milk chocolate and poured it over the top of my Bacon Weave Choco Taco and then sprinkled pieces of peanuts over the melted chocolate. After another half hour in the freezer the chocolate was hardened and my taco was ready to eat!

Now, when I have an idea for something like this I always sort of go in expecting the worst, but I was surprised with how perfect my Bacon Weave Choco turned out, not only in terms of looks, but taste-wise as well. I’m a huge fan of sweet and salty combinations when it comes to food so this was pretty much the perfect dessert for me. Next up… the chocolate covered bacon weave ice cream cone! 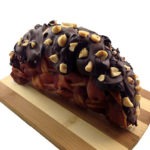 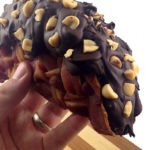 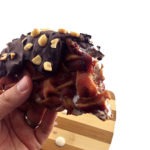